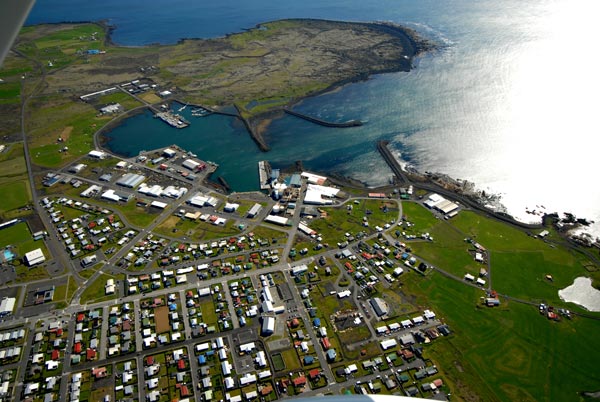 Please refer to Visit Grindavík for information about accommodation, food and drink and things to do.

GRINDAVÍK is a beautiful Icelandic fishing town on the south coast of the Reykjanes peninsula. Life in Grindavík has to a large extent evolved around fishing since the time of its settlement in approx. 934 A.D. In the last few years Grindavík has grown significantly as a tourist destination with its local population of about 3300 people, most of who base their livelihood on fishing or fish related industry. Grindavík alone provides more than 40% of Iceland’s salt fish production with one of the most active harbours in the country.

Grindavík Golf course is a picturesque links course. It winds its way by the shoreline and into the lava fields, creating a great variety of holes. “Vík” horse-rental offers riding tours with local horsemen as guides. Although almost all Icelandic towns have geothermal heated public pools the Grindavík pool was just recently built and is modern and very clean, with a “hot-pool” (yakuzi) and steam-baths. A refreshing dip in the pool or the nearby Blue lagoon (see below) is highly recommended as part of visiting Grindavík. There are five restaurants in the town – so nobody should have to leave Grindavík feeling hungry. The town furthermore contains a car rental, banks, shops, a hotel and a brand new camping site which is one of the best in Iceland.

HERE IS A STREET MAP OF GRINDAVÍK. 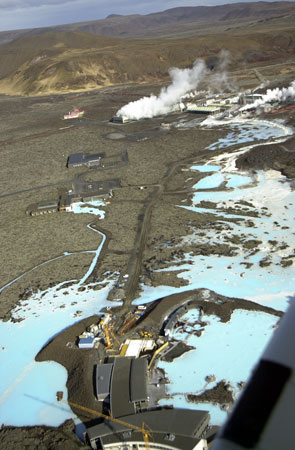 By far the best known attraction of Grindavík is the Blue lagoon. In the year 2007, there was a whopping 407 thousand visits made to the lagoon, a staggering popularity considering that Iceland only has a population of 300 thousand. In the high season, the Blue lagoon accommodates over three thousand visitors per day. The Blue lagoon is in fact the most popular attraction of the country and certainly is among the more distinctive and exotic attraction in the nature of Iceland. Guests enjoy bathing and relaxing in the geothermal seawater, rumoured to have positive effects on the skin. A visit to the on-site spa then further promotes the harmony of body, mind and spirit. Visitors find that it is almost as if the workday stresses are washed away by the warm blue water. The spa's guests rekindle their relationship with nature, soak up the scenic beauty and enjoy breathing the clean, fresh air.

But the scenic nature surrounding Grindavík includes more than just the blue-water hot-spring which has become so popular, and some are positively breathtaking. The imposing and awe inspiring scenic landscape with  enormous hardened lava cliffs loom over paths across the vast expanse of lava fields, but there is also delicate beauty, silky soft moss appears to embrace the violently jagged lava creating in some areas a fantastically surreal “pillow-like” ground but in other places, the threatening form of razor sharp hardened lava with cracks, craters and miniature canyons provide a full scale display of the movements of the tectonic plates. The absolute power, albeit dormant, of mother-earth is rarely as graphically depicted as in the chaotically elaborate lava fields. The ocean pounds the shoreline seamlessly and thereby takes on an important role in shaping the land. It’s no wonder that a number of prominent artists have sought inspiration – many successfully – from the raw nature in this area.

Þorbjörn, a lone hill peak to the north of Grindavík, stands about 250 meters tall and is easily accessible by foot. The stroll is quite rewarding – offering to those who scale Þorbjörn a view of almost the entire Reykjanes peninsula. The Ravine at Svartsengi (called “Gjáin” in Icelandic, which means simply “the ravine”) takes advantage of the latest technology to create a multimedia show which displays the geological history of earth and Iceland, the Reykjanes peninsula and Svartsengi in particular. A visit to Ravine heightens the experience of exploring the area’s nature as the newfound learning allows you to look at it from a new perspective.

East of Grindavík, Krýsuvík, Selatangar, Festarfjall and seemingly endless lava fields are among places to see. To the south, the Atlantic Ocean battles the island endlessly and to the west from Grindavík lays Reykjanes and the Reykjanes light house, the Gunnuhver (the “Gunna geyser”), Brimketill, Eldvörp and a multitude of other interesting natural phenomena.

Grindavík is only a 15 minutes drive from Keflavík Airport and 10 minutes from the Blue lagoon. 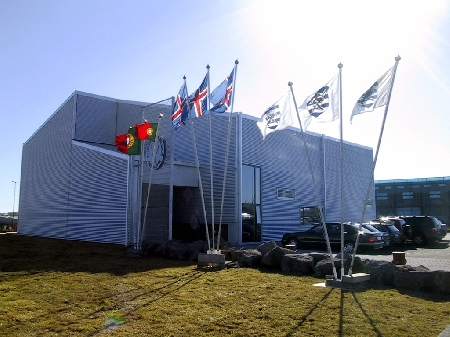 In the late 19th century salted fish was to Iceland what oil is to Saudi Arabia. Every summer people would flock to small villages scattered by the coastline to work in the processing of salted fish for export. As years went by the salted fish became a representative of the nation’s path to prosperity and was even used for as Iceland's coat of arms until the beginning of the 20th century. 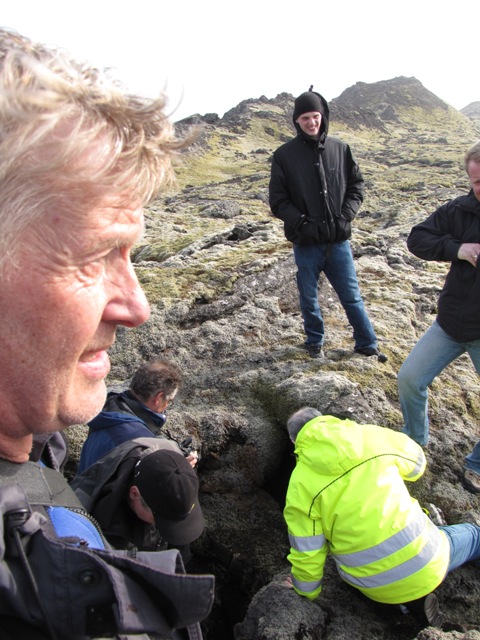 Eldvörp
This is a 10 km long crater row accessible on foot, by bike and by car on a dirt track from the Blue Lagoon to Grindavik link road.  There's a borehole here but natural steam also escapes at various points along the crater row.  The lava is rugged and peppered with holes and caves and clad in thick moss in places.  It has a wild and windswept feel to it.  There is a way-marked walking trail through the lava and the Reykjavegur Trail passes by here too.  It's not as striking as the volcanic landscapes of Lake Mývatn, Landmannalaugar, Askja or Laki but it's impressive enough and importantly is a vital component of the geological showcase of Reykjanes.  The site is signposted from the Grindavik-Blue Lagoon link road, but as it's not well known, it's unlikely that the uninformed would bother to check it out.

Selatangar
This is a former fishing station located at the end of a dirt road about 8 km east of Grindavik, where the rugged Ögmundarhraun lava reaches the sea.  The lava is believed to date from 1150 but what is remarkable about it is the circular depression called Ketill, in which there are features similar to those found in Dimmuborgir at Mývatn.  It's a great place to see the surf crashing on the shore.  There is a parking area, with an information board and Selatangar is signposted from the main road.

Brimketill (surf kettle)
This is an interesting geological feature on the coast 5 km west of Grindavik, where it's thought a surf-tossed  boulder ground out a basin at the base of the cliff, resembing a bath tub.  It's signposted from the main road down a track to a parking area, from where it's a short scramble over rough lava.  This is an impressive place to watch the wave crash on the rocky cliffs, but care is needed.

Lava around the Blue Lagoon
A most impressive lava flow surrounds the Blue Lagoon and the link road between the lagoon and Grindavik passes through it..  This lava flow is seen and admired by hundreds of thousands of visitors, yet I couldn't see any information boards about it.  There is only one place along the road, where you can stop a vehicle and get out, and that is up on the hill, but there isn't any lava there.  Still this would be a good place to put an information panel.

Lava Caves
There are many lava caves on Reykjanes but most are not readily accessible, not well-advertised.  This is in part to protect the often fragile formations inside the caves.  One cave is sited right by the main road from Grindavik to Reykjanesbraut, where a parking area has been made.  The cave is not signed even though there is a ladder down inside it.  It's at least 30m long and in places quite low-ceilinged, and a torch and helmet are essential.  Again, an information board and proper sign would help visitors make more of this place.

Other volcanic features
Several craters are found in the vicinity of the geothermal area Krýsuvík.  The mountain ridges on Reykjanes are all formed in subglacial eruptions during the Ice Age as is the prominent peak Keilir. 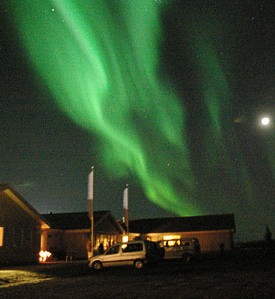 Krýsuvík
This is an area of mud pools, steam vents and craters about 20 km east of Grindavík on the coast road which is scheduled to be surfaced.

Gunnuhver
A high temperature area of mud pools and steam vents produced by sea water, which makes it different from other such areas.  The area is highly unstable and at present is closed to visitors.  This is a pity as it is an obvious attraction.

Power Plant Earth
Great example of clean, renewable energy production. Boreholes, pipes and the plant itself are the attraction. The visitor centre is a fancy multimedia exhibition.

Shipwrecks
The Reykjanes coast is rugged and many ships have run aground on its rocky shore.  Among the best known was the Jamestown, a sailing ship which drifted ashore in 1881, its load of precious timber providing building material for many houses in the area.  The peninsula east of Grindavik has the remains of a steel-hulled vessel split in two parts by the force of the waves.  It is a pity that there are not more signs erected to tell the story of these vessels and their crews.  There is an information panel at Garðsskagi, which has a map of shipwreck sites and their dates.  Visitors from countries whose ships were wrecked on this coast could be interested to learn more.

Lighthouses
Reykjanes has eleven spectacularly sited lighthouses along its wild coast, including Iceland's oldest Reykjanesviti dating from 1878 and Iceland's highest at Garðsskagi.  Most are reasonably accessible and it would make a great attraction to publish a leaflet 'the lighthouse trail' with a map and information on the lighthouses. 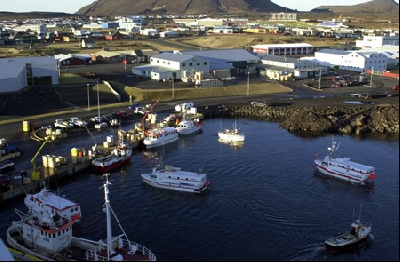